What is a scale? The easiest way to explain scales is as a collection of notes that because of a musical reason have been grouped together. The benefit of knowing scales in music is that you know how to orient yourself among notes. This will among other things give you a foundation for improvising – notes in a particular scale always sound good played together – and composing.

You don't have to read notes to be able to learn scales (but it is always good to be acquainted with note reading). Neither do you have to know a lot of chords, but if you already know some chords the scales will be much easier to relate to and subsequently memorize. And by knowing scales you will be able to learn chord easier – chords derive from scales.

A scale often consists of seven notes – this is the case of the Major and Minor scales. The scales are also octave-repeating, which means the pattern of notes is the same regardless if you play a scale on the left, the middle or the right side of the keyboard.

On a full-scale piano, there is a total of 88 keys, but there are only twelve different tones which are repeated from low to high tones, from the base to the treble.

On the illustration above, you can see twelve tones that make one octave and these notes also form the Chromatic Scale. C# is sometimes written Db, D# is sometimes written Eb and so on. These are called enharmonic notes and how they are written depends on the key they belong to. The symbols after the letter (accidentals) are known as sharps and flats. C# is spelled “C sharp” and Db is spelled “D flat”. This is of course only theory and don't affect the sound, but is nevertheless good to know about.

We can use the G Major Scale as a first example:

And now look at the F Major Scale:

You have seen two different scales where sharps (#) and flats (b) are used. The rule that decides if the note is raised or lowered depends on the intervals between notes in the scale. In the examples above, F# is a raised F and Bb is a lowered B.

On some occasions you may observe two sharps or flats in adjunction to a described note in a piano score. These are called double-sharps and double-flats and need a theoretical explanation. If we take the key of D# as an example. This key includes both D# and D, but to make it functional in a score with a key signature it must be D# and C##; otherwise, you would be lured to play a D# instead of a D.

This affects how notes in scales are written out. For example, the C# Major Scale is correctly written: C#, D#, E#, F#, G#, A#, B#. Notice that B# is written instead of C. B# does not exist in reality and the note is played as a C. (There are many beginners using the site and mentions such as B# would clearly confuse some, therefore C is sometimes written instead of B# to avoid confusing whereas the formally correct notes are presented below in the scale overviews.)

See all double-sharps and double-flats listed in Appendix A.

How to Learn and Memorize Major Scales (theory lesson in PDF)
All lessons are available in the member area.

Music pieces are written in a certain key, like “Brandenburg Concerto No 1 in F Major” by J.S. Bach. It would be feasible to re-arrange this concerto to another key, like for example D Major. It would musically still be the same to a large extent, but the timbre would be different. See also The difference between scales and keys.

Certain major and minor scales are related by sharing the same notes. C Major and A Minor, for example, inherit the same notes (by differ by starting on different notes and therefore also differ in intervals). This relationship is named called relative keys, which is not the same as parallel keys. C Major and C Minor are an example of the latter.

Most songs start and end with the same tone which tends to be the first note, the tonic, in the scale. Then you play notes from a scale, you can hear that the music seems to gravitate towards the first note, it is like some tension is left until you return to the first note. This phenomenon is called tonality.

The scale degrees have Roman numerals as you can see below:

Whereas seven-note scales include all of these scale degree, five-note scales lack two of them, which affect the sound character.

Why should you learn these terms? One great thing about knowing them is that you can have a better understanding of scales and chords in an abstract way. For one of many reasons, this will help you transposing music to another key and give you hints while you are composing music.

To give a concrete example: in blues you frequently use the tonic (I), subdominant (IV) and the dominant (V) in regard of chord progressions. By knowing this theoretical relationship, you can better understand how to play blues in different keys.

Intervals in music describe the distance between two notes. The most common intervals are: prime (unison), second, third, fourth, fifth, sixth, seventh and octave. See these intervals illustrated below:

Intervals can further be divided in minor, major, diminished and augmented. They can be used to describe the structure of a scale category. For example, the Major Scale is built by second intervals: two minor and five major seconds.

Here are the most important intervals:

See also examples of note intervals listed in Appendix B.
Ear training: Listen for the interval.

When a scale is presented, the tones are ordered from the root note followed by the tones that comes in order. This doesn't mean that scales should be played in a certain order. When practicing, yes, when improvising, no.

Since the tones in scales are not played simultaneously where is no need for inversions of piano scales as sometimes is the case concerning chords.

The words tones and notes are sometimes treated as synonyms, but they can be distinguished. The sound in music is made from tones. A note rather describes the tone in matters of pitch and duration. Notes are used as symbols in sheet music for describing how the music should be played in measurable ways, such as a whole note being played be the C key on the fifth octave, a quarter note being played on the E key on the sixth octave.

All steps and the distances in semi-steps (semi-notes) they refer to.
Half: one step.
Whole: two steps.
Whole and a half: three steps.
Quadra-step: four steps. 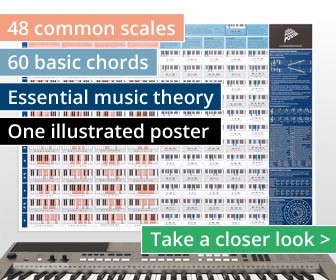