How to read piano notes and sheet music

If you ask yourself what all symbols and the other stuff means when you look at sheet with piano notes, you can find out by reading the following guide.

This is the beginning of the Christmas song “Jingle Bells”, chosen as a simple example. We will go through all the symbols and lines step by step and explain what they mean.

These five lines are known as the Stave or the Staff. The function is to hold positions for notes so the piano player will know which tones to play on his or her instrument. Note symbols can be placed both on the lines and between them. In addition, positions above and below the five lines can occur. In these cases shorter lines, called ledger lines, marks the positions.

You could say the positions are representing different tones. Exactly which tones will be told soon, but we also need a reference and the references in this case are the clefs and key signatures (see below).

In a musical notation system, there are also vertical lines that separate the staff into bars.

The treble clef (also called G clef) indicate the tone range for which the following notes on and between the lines belongs to. When you are playing piano, the notes after the treble clef are normally played with the right hand.

In the lower part of the notation system, you find the bass clef (also called F clef). When you are playing piano, the notes after the bass clef are normally played with the left hand. It is easy to remember since the bass notes are on the left side on the keyboard.

How the notes are arranged in the notation system

As we learned earlier, the treble and bass clefs are both indicators of tone ranges. The illustration below shows all the tones in different positions on the staves when the reference is given by a treble and a bass clef:

From the illustration, we also get the answer to the question concerning where the ranges of the treble and the bass clef meets. The C notes expanded with long lines are the same note on the keyboard (the fourth octave from left). This is called “the Middle C” and can be seen as a meeting point for the treble and bass clef in the notation system.

Key signatures are marked by either sharps (#) or flats (b) and indicate which key the song is played in. This may be a little confusing at the beginning, depending on how familiar you are with music theory. The # symbol means that the notes on these lines are raised one step. In this case, all F notes are played as F#.
If you look in the fourth bar, you can see this symbol

, which is called a natural. It indicate that the sharp doesn’t count anymore and the note is the normal F. From the beginning of the next bar, F should again be played as F# (if no natural is shown).

The next thing we see after the treble clef is 4/4 and this is called the time signature. The time signature specifies how many beats where is in each bar. This can be quite complicated, but you can play piano or any other instrument by reading notes without knowing the details about time signatures and since this is only an introduction we skip it for now. To simplify matters you could think of this as the rhythm.

The next group of symbols is repeatedly shown in different styles in the notation system. These symbols tell the musician what tones to play, depending on their positions, and the tempo, depending on how the look like.

This is a whole note, the duration of the whole note is equal to one full bar.

This is a half note, a half note is played for a half of the duration of a whole note.

In the bar three and four, there are also an eighth note and a half note each with a dot after. The dot means the duration is a half time longer than the original value.

Notes can also be stacked up, which is often the case when chords are involved.

By now you should know the fundamentals about how to interpret piano notes. A recommendation is to also learn about musical terms that sometimes are written out on piano sheets and which involves more instructions about dynamic and tempo. 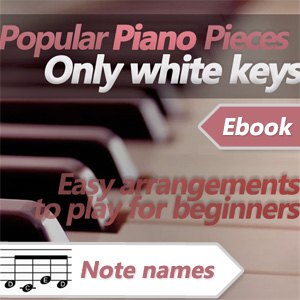